Wrapping Up in Rome 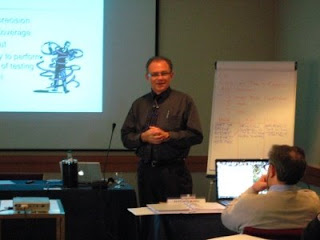 It's been a busy week for me here in Rome as I taught two public classes - Software Testing and Advanced Software Testing. Thanks to all the participants that made it a great experience. I look forward to a return trip in June.

In the Advanced class, we got into test efficiency techniques and how to design tests that are creative and challenging. We also discussed test metrics and how to use them to improve development and testing.

It's hard for me to remember to slow down my rate of speech when speaking through an interpreter. Italian requires many more words than the English equivalent. And forget humor. It just gets lost in translation. I really do appreciate my two interpreters and the other support during the class. You guys are the best!

Sunday was my only sightseeing day. I've been here twice before, last November and last June, so I'm getting to know my way around pretty well. My next goal is to learn more than six words in Italian!

I had not been in the Castle St. Angelo yet, so I decided to check it out. I'm glad I did. The views are spectacular. If you explore around you can go all the way to the top, which allows a full view of central Rome. It's a great value for just 5 Euros. Muphy's law was at work, though. I was taking pictures throughout the castle but when I got this wonderful view - dead battery in the camera.

Fortunately, my hotel is close by so I went back and recharged for an hour, then returned to the castle. They let me back in and I took the pictures.

Here's a travel tip: Always take a spare ATM card. In Europe, the ATMs require fully inserting your card. I like the swipe option because I don't temporarily give up my card. Sunday I was trying to get some cash from an ATM and for some reason, it kept my card. Had I not been teaching on Monday, I could have gone to the bank and retrieved it, but since the banks close at noon and at 4 P.M., I had no options except to report it lost and use my spare at a different bank closer to my hotel.

Tomorrow I head home but have an overnight layover in London. It has been a great trip, but I am ready to be home and celebrate Thanksgiving!
Posted by Randy Rice at 3:42 PM No comments:

Travel Tips Around the Hague (World Forum and Museum Area)

As a traveler, I always like to pick up and share helpful tips when possible. I like to be a traveler instead of a tourist. As a business-oriented traveler, this can be challenging. For example, instead of paying $30 for breakfast at the hotel, I like to experience local color and less expense.

So while I was staying at the Golden Tulip by the World Forum in The Hague (which I thought was a great place to stay), here are some little finds: 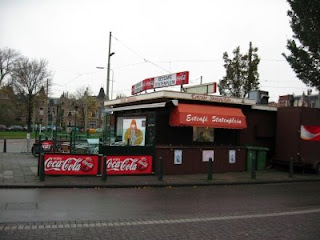 Right around the corner and down the block there's a little coffee shop. It's right on the #17 tram line after the museum stop. That's where locals gather in the morning and have coffee and breakfast. The owner fixed me a great breakfast of fried eggs, bacon and real coffee (brewed - not the Americano-style) for 3.20 Eur. It was great! I ate there three or four times in all. If you explore around, you will find a shortcut trail that takes you from the coffee shop to the World Forum.

I am on a two-week tr 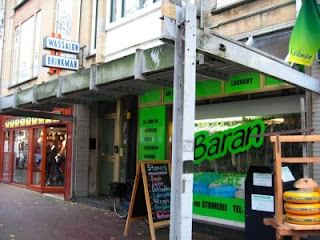 ip, so I must do laundry, or have it done for me. Hotels charge an arm and a leg for this, so I scouted out this self-serve laundry just a few blocks from my hotel in the shopping district, which is only 3 - 4 blocks from the hotel. I was able to do two small loads of laundry for 12.50 Eur. While I was doing laundry, I browsed in the many stores in the shopping area. If you have trouble finding it, just ask the people in the coffee shop!

By the way, there is also another laundry just down the street. 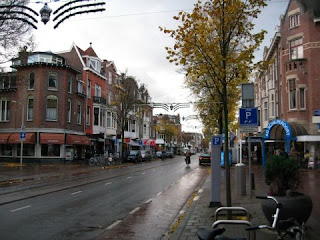 The shopping area just blocks from the hotel has almost anything you might need on a trip: clothing, groceries (there is a large store there by European standards), banks (ATMs), drug store, carryout pizza, restaurants, hardware, a copy shop, bookstores, amazing bakeries, chocolate and cheese stores, and more. Just watch out for the chicken wings - they didn't agree with me. 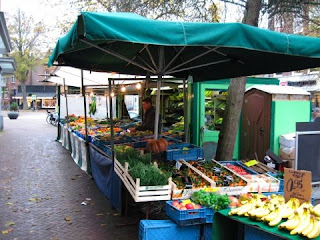 I hope these make your trip to the World Forum in The Hague a little easier and more interesting!
Posted by Randy Rice at 12:02 PM 2 comments: 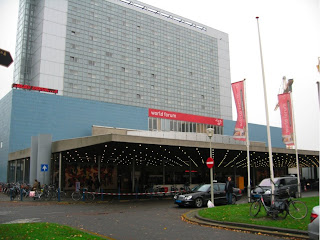 I thought EuroStar 2008 was a great conference. The tutorials, keynotes and tracks were strong in my opinion (I must also say I want to give my perspective as an attendee as well as a speaker. It's hard sometimes to step back and be objective, but I'll try.).

One of my tests of a good conference is whether I'm torn between attending track sessions - and I was. I also spent a fair amount of my time in the interactive sessions, such as the ones on the testing manifesto and testing standards. It was nice to be working on things to advance our testing profession. I'm not sure where the whole testing manifesto thing will wind up. I hope it is someplace similar to the agile manifesto - something simple, meaningful and easy to read and remember. 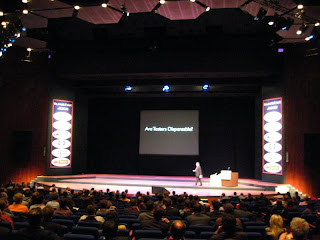 James Whittaker was his insightful and entertaining self (that video he shows about the future of medical software is amazing and shows we're going to need better testing). His talk was "The End of Testing as we Know it", and I felt all the keynote speakers made me think. James Lyndsay spoke on "Becoming Agile - Reshaping Testing for an Agile Team." He had great points and I'm always impressed by the simplicity and impact of his slides!

The expo was amazing. In the U.S., the exhibits tend to be rather bland. In this show there were two coffee bars, a cocktail bar (I had a smoothie), a chess match, a bicycling competition, etc.

They had a contest where if you got all the exhibitors to stamp your card, you could enter the drawing. So, I computed my odds (about 1 in 30, I figured) and went for it. The grand prizes were two free passes for next year's conference and eight Nintendo Wiis. All I wanted was a Wii. Guess what? I won a conference pass. I didn't factor that in my odds! Oh well, I don't have the luggage space or weight anyway.

The gala was also fant 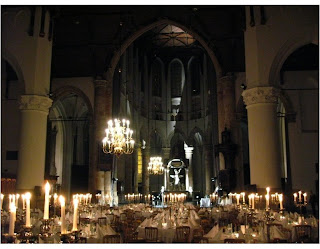 atstic. It was held in the Grote Kerk, which is a former cathedral. It was big night for me, winning the best tutorial award. Thanks so much to the 60 or so people in my "Becoming an Influential Test Team Leader" tutorial that made that happen. It was totally unexpected! Much more important than the award was that we experienced and learned things together that will help us be better in our leadership roles.

My prize was a beautiful 9 pound Waterford crystal vase which I will find a great place for at home. Thankfully, security in the U.K. has relaxed security rules to allow two carry-on pieces of luggage!

One other thought concerns model-based testing and how it differs in Europe than in the U.S. - At U.S. conferences, model-based testing is often presented as a manual process. In Europe, they talk about the tools that can make model-based test design happen faster and more completely than using manual methods. I just thought that was interesting.

Dot Graham will be the chair for next year's conference in Stockholm, Sweden. I wish her all the best!

I would like to thank all the kind people who helped me feel right at home. Many thanks to the Qualtech Conference team - Tracy, Siobhan, Lorraine and others. Also, thanks for the conference committee for selecting my talks and to John Fodeh for my keynote introduction and to Bob van de Burgt as conference chair. You all did a great job!
Posted by Randy Rice at 11:29 AM No comments:

Greetings from The Hague and EuroStar 2008

I've been pretty busy since StarWest, so I haven't blogged any since then. Hopefully, I'll make up for that on this trip to The Hague and Rome. I plan to blog on three topics the next couple of weeks: 1) Highlights from EuroStar, 2) My thoughts on the economy and software testing, and 3) Travel tips for The Hague and Rome - complete with pictures.

The flight over went well - as good as it gets in coach on American Airlines. In the airport in Oklahoma City I discovered I forgot my power supply for my MacBook (Darn - I didn't use my checklist!). The Apple factor introduced a complexity factor because the airport shops assume nobody owns a Mac! So, using my iPhone in Dallas, I saw there was a PC World store in Heathrow which carried Apple accessories.

I had a five-hour layover at Heathrow in the new Terminal 5. It is an amazing place. And yes, I found a power supply for my MacBook at a great price. Even with the exchange rate, I was happy to pay it!

The British Airways club there is awesome. Man, the American Airlines' Admiral Club could take some lessons from them. They have all sorts of food and drink at no charge (of course there is the elite status required), plus wi-fi included, and one of the best things after a long flight are the individual wash rooms. This all made the long layover not so bad.

I was surprised that BA had food service on my 45 minute flight to Amsterdam. We don't even get pretzels anymore on US airlines!

Luggage is often a challenge when travelling solo overseas. I took the train down to The Hague. I had a large suitcase plus a duffle bag for my computer and other carry-on essentials. I had two people (other travellers) that helped me with my bags on and off the train. I was impressed by their hospitality!

The room here at the Golden Tulip hotel by the World Forum is great. A nice bed with a U.S. sized room and weekly rate wi-fi is awesome. I only can use 3 TV channels - CNN and 2 BBC channels, but at least I keep up with news back home.

Yesterday I presented a full-day tutorial on "Becoming an Influential Test Team Leader", which seemed to go well. I haven't seen the evaluation results yet, but we had about 50 people and it was a great time together. By the end of the day, we were all good friends!

The biggest challenges are getting adjusted to the time change (I started my session at 2 a.m. CST and ended at 10 a.m. CST!) and adjusting to the cultural differences in my remarks.

This afternoon the conference starts. James Whittaker from Microsoft speaks. Later, the guys from Google (Bharat Mediratta and Antoine Picard) give their "Testing on the Toilet" talk. That has been a big hit in the U.S.

Tommorow morning I deliver my keynote address on "Trends that May Shape the Future of Software Testing". I'm making some last-minute tweaks to reflect some recent events.

Better go now, but I'll post again soon with some impressions from the conference and some pictures.
Posted by Randy Rice at 4:51 AM 2 comments: