(This event has passed, but we offer an e-learning version, or will be happy to bring this training course to your company.)

The workshop will be held at the Hampton Inn, I-40 East (Tinker AFB) location at:

You can see the details (outline, pricing, etc.) and register at:

GSA discounts are available for this workshop. Just contact me for details.

I hope to see you there!
Posted by Randy Rice at 11:27 AM No comments:

I ran across this article in Information Week and I'm thinking, "What's wrong with this picture?" We have unemployed IT workers here in the USA and it seems that we are training people who will eventually compete with them for the few jobs that exist. By the way, there is an update that we will be doing the same thing in Armenia. Of course, this will all be done with borrowed money.

"Despite President Obama's pledge to retain more hi-tech jobs in the U.S., a federal agency run by a hand-picked Obama appointee has launched a $36 million program to train workers, including 3,000 specialists in IT and related functions, in South Asia. Following their training, the tech workers will be placed with outsourcing vendors in the region that provide offshore IT and business services to American companies looking to take advantage of the Asian subcontinent's low labor costs.

Under director Rajiv Shah, the United States Agency for International Development will partner with private outsourcers in Sri Lanka to teach workers there advanced IT skills like Enterprise Java (Java EE) programming, as well as skills in business process outsourcing and call center support. USAID will also help the trainees brush up on their English language proficiency."

I don't know. I've stopped asking "why?" Back when outsourcing became all the rage we were told that in a new service economy people would rise to higher level positions. Instead, these US IT workers are trying to find the best position they can in an economy where there is a race to the bottom in terms of pay.

I would love to hear your thoughts on this.

Recently I was interviewed about application performance risks. The final question was, "What are some performance risks you see in new technologies?" My answer was the cloud computing and Software as a Service (SaaS) risk.

Actually, there are many risks and concerns in the SaaS model. This is not to say the model does not have value, even great value. It's just that there are things you need to know before adopting SaaS.

The basic idea of SaaS is that you use software applications that are developed, hosted and maintained by a vendor. You trust that the processing will be correct, fast enough for you, secure, easy to use, available, reliable, etc. However, you have no control over those things. When the vendor has a problem, you have a problem. That can be a rude awakening to people.

To illustrate the performance risk, I saw an article recently about the overload at Twitter:

Twitter has a huge challenge with extreme traffic spikes. Now, on the upside, this is not a national security type of application, and most of us Twitter users have gotten used to the "Fail Whale" picture and just say, "Oh, well...I'll tweet that later." 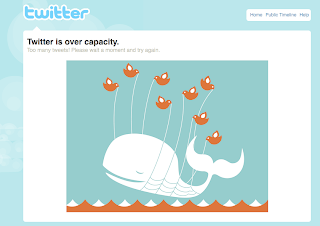 Then, other things happen: 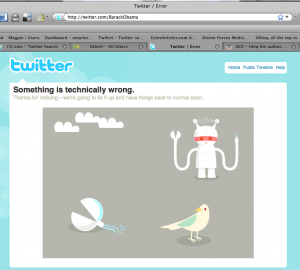 But there is a business impact to the companies that sell services interfaced to Twitter:

"'Twitter API issues in the previous weeks have been terrible for us," said Loic Le Meur, founder and CEO of Seesmic, which makes Twitter client applications for various desktop and mobile platforms. 'Users always blame Seesmic first since it's their primary interface to Twitter. It's extremely frustrating because there is nothing else we can do than warning users Twitter has problems. It is very damaging for us since users start to look for alternatives, which fortunately have the same problems, but damage to the brand is done,' he said via e-mail.'"

To be fair to Twitter, they've done a lot to improve reliability in recent years.

In a related story, from last week, I read on Bloomberg.com:

"Interest in the SaaS (software as a service) delivery model is growing to the point that by 2012, almost 85 percent of new vendors will be focused on SaaS services, according to new research from analyst firm IDC. Also by 2012, some two-thirds of new offerings from established vendors will be sold as SaaS, IDC said."

So, what does all this mean to you?

If you are considering SaaS as a major application delivery method, then be aware of the risks. In reality, there isn't a lot you can do during a SaaS failure. For example, you can't just call up the folks at Twitter and tell them to "get it fixed" (like perhaps you can speak with the developers in your own company).

Some of this goes back to service-level agreements (SLA), but no vendor I know of will guarantee 100% uptime. Even if they did, there are other risks, such as correctness, not typically covered in an SLA.

I wish I had a handy list of things to mitigate the risks, but every case is different.

I would be interested in hearing your experiences with SaaS and how you deal with the risks, so please leave a comment.

Posted by Randy Rice at 6:23 PM No comments: