Giving the Customer a Little Extra

It's 108 today in Oklahoma City, so I find myself blogging, working indoors, and playing some guitar.

I had a revelation awhile back at Five Guys Burgers. I know, for many people, revelations happen in church, during a sunset, etc. Mine happen while I'm stuffing my face.

If you have ever eaten at Five Guys, you know the throw an extra handful of fries in your bag on top of everything. There's a good chance you may get full on the fries before you ever reach the actual container of fries. This got me thinking about why they did this. Then it struck me, this is a Purple Cow. How many other fast food places do that?

In contrast, I got a burger and large fries from one of our local chains (Braum's) recently. When I looked at the fries, I could count them. There were 15 I think. Plus, they were those frozen ones, unlike Five Guys which are cut in the store (like In-n-Out). 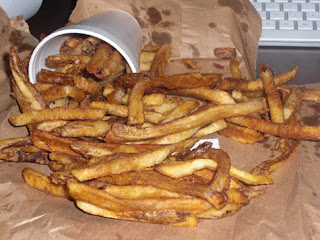 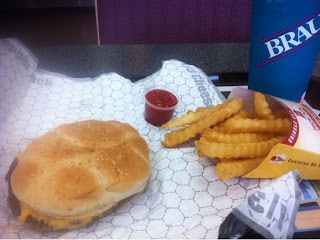 It probably costs five cents or less to throw in the extra handful of fries. In return, Five Guys gets loyal and raving customers. I've never seen an ad - print, TV, web, anything, but I've talked to many people who brag on them.

So, what's the attraction? What makes the difference?

Isn't it nice when you get more than you expect, not less? 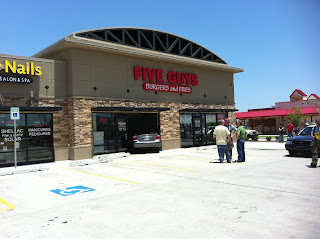 This is our new Five Guys in Moore. Someone apparently thought it was a drive-in.


It's sad that in our society, people are cynics about deals. I see this all the time in dealing with our customers at Rice Consulting. I quote a price and people ask, "What's the catch?". It's simple. There are no catches.

For example, I give 12 months for people to finish an e-learning course. Most of our competitors give 90 days. If someone needs more time, I always extend the time to take a course.

In the past weeks, here are some other great examples:

We bought a 2010 Ford Explorer recently from Reynolds Ford in Norman, OK. I didn't haggle on the price, bought the extra protection package, got Ford financing, the works. The whole process took a little over an hour and went as smooth as silk. Our salesmen, Brent was helpful, friendly and knowledgeable. Then, I discovered there was only one set of keys. So, I called Jayna at the dealership for an extra set since they cost about $200 these days for the chipped keys. When I picked up my car from the service area, they had an extra set of keys for me. Oh, and when we took possession of the car, it had a full tank of gas, was washed and the tires were glossed. That's extra for the customer and I'm a fan now. Reynolds Ford knows the value of a lifetime customer is more than $200.

I have actually asked for a free cup of coffee when buying several bags of coffee at other Starbucks and the response was "Sorry, we don't do that anymore." That left me unimpressed. I'm much more inclined now to buy from the Norman store.

There used to be a time when giving a little extra to the customer was common practice. Now it seems that the trend is to reduce the product and charge the same. I believe that's a short-sighted approach.

At Five Guys, their corporate policy is to top off the fries. At Braum's, their policy is to not under any circumstances exceed the size of the container.

In other cases, like at Reynold's Ford and Starbucks, it's the performance of the right people making the right decision by the customer.

In software testing, we need to be showing our added value. One way to do that is to give a little extra to your customers. Be helpful to them. Ask what they need. If they don't know what they need, help them see the possibilities.

Some people see their customers as "those which must be endured." For sure, there are challenges. I choose to see my customers as the reason I'm in business - to serve and to stay in business.

You may not have a "business" but I suggest that you have many of the same reasons to please your customers. Without them, you wouldn't have a job.

OK, enough for now. I'll go practice Black Dog (Led Zeppelin) and Bach Cello Prelude 1. What can I say? I have a wide range of musical tastes!

Have a great weekend!
Posted by Randy Rice at 2:39 PM

Recently I grabbed a bagle and fruit smoothie from our local Panera Bread(Mishawaka, IN). A coworker of mine happend to be in the store at the same time and she ran into me as the manager was handing me my drink. She asked me how it was and mentioned she'd wanted to try Panera's smoothies. While this brief conversation went on, the manager turned back to the blender pitcher and poured what was left of the smoothie mix into a second glass and handed it to my friend! We were both blown away by such a simple, yet amazing act of Customer Service!! Those simple acts are the ones that stay with a customer for a very long time. And the word of mouth "advertising" that that manager just bought cost nothing more than the price of the excess smoothie mix that would have been poured down the sink. Well done, Panera!!

Thanks for the great story. It's amazing how the extra stands out. Your comment about the "word of mouth advertising that that manager just bought cost nothing more than the price of the excess smoothie mix that would have been poured down the sink" is something I often thought about when getting turned down for a free cup of coffee. The "extra" often costs nothing and actually makes good use of what would otherwise be waste!

This is great! Nice blog

Thanks - I could use more of the healthy and delicious!

Interestingly enough when I saw the two pictures associated with this blog prior to reading it, I thought it may be all about presentation. Who would have guessed that the flurry of fries and greased stained bag would have been the desired result? Maybe I should be expecting more.

Thanks! It's like in the movie Groundhog Day when Bill Murray says, "This is one time where television really fails to capture the true excitement of a large squirrel predicting the weather."

Thanks for the comment, and it's good to see priorities are still in place!