I know you may have been wondering if I fell off the face of the earth, got abducted by aliens, or whatever. Well, I have ventured on to a full-time project in San Francisco. This requires that I commute from Oklahoma City each week, which is about 7+ hours each way, including connections. (That is, when I actually make it home without getting stranded someplace!)

Of course, this really constrains my time for blogging and writing. I've also not presented a podcast or webcast for over a month. I hope to get back into that soon.

OK...enough about that. I'm not bitter, I'm better.

I am posting three pictures I took recently. The first is a rainbow over downtown San Francisco taken from my hotel room on the 30th floor of the Westin. 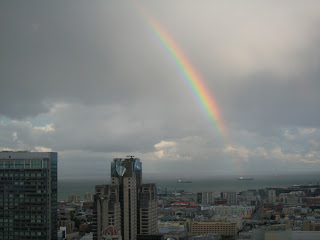 The next two are also unique. I have found that one of the best places to grab a quick dinner that's really good is in the basement of Macy's across from Union Square. There's a Boudin Bakery (which has some of the best clam chowder and tomato soup I've ever had - and yes, I've been to Boston!), also there's a Wolfgang Puck Express (I love the rosemary chicken there), and other places that are good. 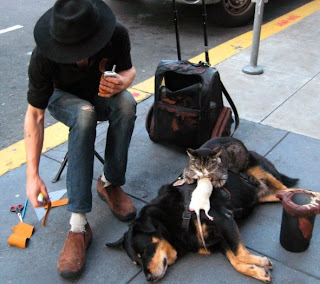 Outside of Macy's nearly every day, you will see people with their cameras and cell phones out taking pictures of this guy. He's got a big dog, a cat that sits on the dog, and a rat that sits on the cat. Now, it's amazing to see them just laying there on each other.

Believe it or not, the other day, I saw him walking his dog, with the cat STANDING balanced on the dog, and the rat resting on the dog. There are many homeless people on the street begging for money. I saw this guy counting his tips the other day and he had a wad of bills. I think that's awesome! He asks for a dollar tip for taking a picture. The way I see it, he's in the entertainment business. I was happy to contribute to a friendly guy with quite a little show going on. 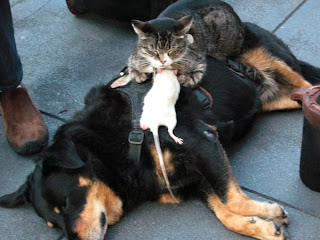 I ought to title this picture, "Can't We All Just Get Along?"


I am also working on two books - Testing Dirty Systems and also one on UAT. I do get some time to write a little in the evenings.

I'm really looking forward to presenting a tutorial, track session and keynote at StarEast in a couple of weeks. Then, I conduct two days of training on use cases and root cause analysis in Kansas City on May 13 and 14. (We still have some seats available - go to www.kcqaa.org for details.)

I also have some other blog posts cued up, so I should have another posting soon.

Thanks for checking in!