Greetings from Rome where I am preparing to teach two courses this week: Structured User Acceptance Testing and SOA Testing.

I always like to arrive 2 or 3 days in advance of training overseas just to get adjusted to the time before I start teaching. Plus, in Rome there's always a lot to see and do.
Today (Monday) is a bank holiday here so I'll be exploring around one more day. The past two days I have been walking quite a bit. My plan was to get a 48-hour ticket on one of the open busses that travel around the city. I figured that I could stay awake and yet not get too tired.
Saturday was great. I arrived Rome about 8 a.m., got into the hotel by about 10 a.m. and hopped on the bus at 2:00 p.m. The great thing about these busses is that you can hop on and hop off at key stops and you have access for 48 hours. There's also a recorded narration that is about 30 seconds behind the thing you just passed.
Sunday was not great in terms of the bus service, or lack thereof. It was a classic load issue. Too many people, too few busses. One might think that a useful strategy would be once you get a seat - keep it. However, at various stops they made everyone get off the bus. Then, to get back on the bus was nearly impossible. Unless, of course, they made everyone get off the bus. Mama mia! 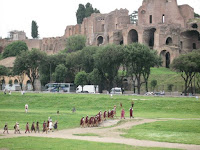 So, I took a leisurely stroll from the Termini station to the Circus Maximus (complete with Roman soldiers. I'm not sure what that was all about, but I felt like I was in a time warp.). That took about an hour.

Along the way I saw all kinds of cool things, like the Colosseum and the Forum. It's warm and humid here - a lot like Oklahoma except without the tornadoes. So, I was ready for ANY ride to get me close to the hotel.
I finally got on a bus, but not on the open part. I didn't care. You might say I enjoyed as much as I could stand!
There actually is a point to this story. In teaching about test scripts, I often say they are like bus tours. You go where the bus goes, whether you want to or not. I thought about this analogy a few times the past couple of days. However, one thing that caused me to think about test scripts in a new way is what happens when you have to get back on the bus (script) and can't get back on. 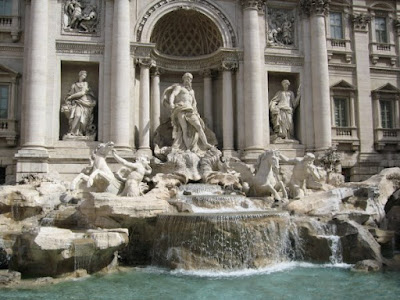 That happens in testing using scripts sometimes. Unless your scripting is well constructed and organized, you may have trouble getting back to the point of getting a reliable test. In other words, it may be hard to test what you have intended to test.
And, sometimes you test so much using scripts you just want to get out and walk. That's what I did on this trip to see the Trevi Fountain. Also, that's where my trouble started, but I'm still glad I took the option to hop off the bus.

When testing software, you may also see the need to hop off the bus to explore things. That's fine as long as hopping off the script doesn't mess up other related tests. I often note the things I want to explore and come back a little later to test them.

Well, it's off for another day of exploring Rome!
Posted by Randy Rice at 12:57 AM

Randy - the SOA Testing curriculum looks great. I am sure the attendees will agree. Good luck with the course.